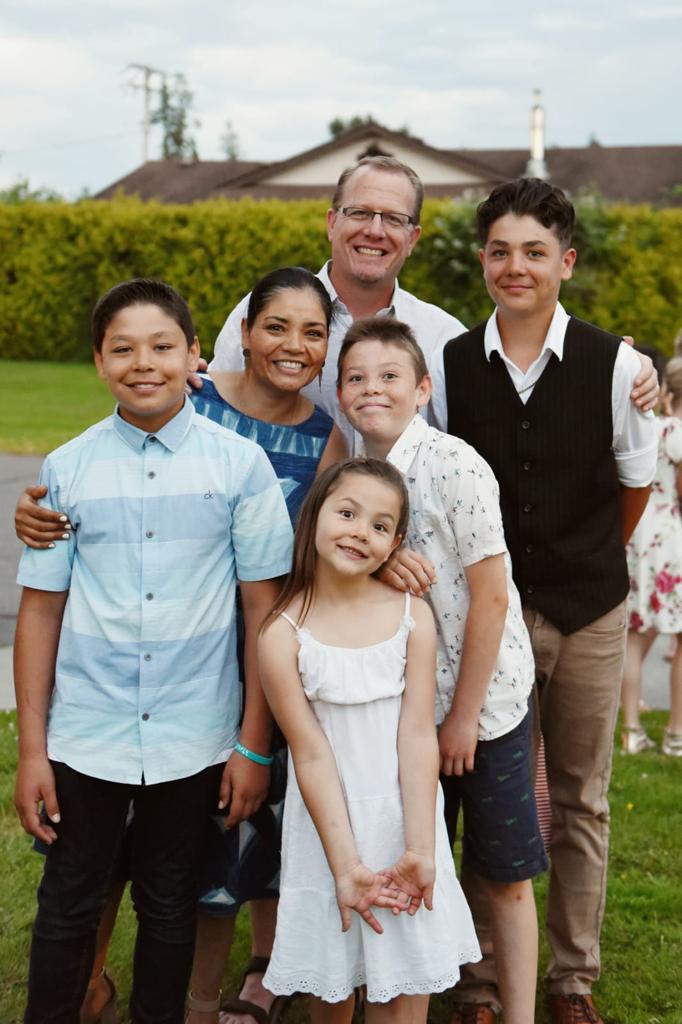 Serving in Abbotsford, British Columbia at the Children of Hope office.
Jeremy’s testimony

Currently my wife and I are members of the Refuge Canadian Reformed Church in Langley, BC. Children of Hope is currently in a leadership transition as I am being trained to become the Executive Director of Children of Hope in the new year (2023). Besides my responsibilities at Children of Hope, I am the father to four wonderful children: Benjamin, Mateo, Samuel and Emma. God has been with us every step of the way and we trust the plan He has for us. We are doing our best to live in His path and let Him lead us for His purpose that He has set out for us from the creation of the world.


I am a twin, of a family of seven. I was raised in a Christian home and attended a private Christian school called Ebenezer, located in Smithers, British Columbia. When I was 18, I professed my faith and made the commitment to follow the Lord in all that I would do. Since then, there have been many ups and downs in my life story but the Lord was continually by my side. I knew that by His grace He would help me in this life.

In 2000, I met Duane Visscher (member of the Langley Canadian Reformed Church) who shared about a children’s ministry in Mexico. The Lord planted a desire in my heart to go. At this point, I had been involved in mission work with the Indigenous peoples near Smithers, British Columbia. The Lord was using this to prepare me for ministry in Mexico. In January 2004, I finished my degree in Forest Operations and went to Mexico.

While on the plane to Mexico, with Duane Visscher and another friend, I prayed that the Lord would use me however He saw fit. When arriving in Mexico, it was a huge shock to suddenly be in a culture where you could not communicate with people, but I learned that the love of the Lord has no boundaries! My initial plan was to volunteer for two months in the construction projects at Pan de Vida in Queretaro. In these two months, I met a girl that I was interested in and so extended my stay for another two months. Her name was Ana. After these months, I returned to Canada to work in forestry to save funds. I needed to return to Canada also to have time away from the ministry of Pan de Vida to clear my mind of the culture and feelings so that I could pray about what the Lord’s will was for my life.

After much prayer and time in God’s Word, I returned to Pan de Vida half a year later. I knew that when I returned to Mexico, it would be for whatever time the Lord wanted me to stay. I continued in the construction work, taught English for a few months, and grew in my relationship with Ana. Ana and I were engaged in April 2005 and were married on December 22, 2005. There have been many changes in our lives since: I have been working in several Children of Hope children’s homes now for sixteen years. In June 2015, Ana and I became General Directors of Pan de Vida orphanage. After 6 years of being the directors, we felt God leading us to return to Canada. I was asked if I would like to take on the position of Administrative Assistant at the Children of Hope Office, which I accepted. After completing my wife’s Canadian Permanent Residency process we moved to Langley, BC on August 19, 2021.

I am the oldest of six siblings. I was born in Queretaro, Mexico. I lived at the Pan de Vida orphanage for about 11 years. My father was an alcoholic and my mother was a victim of my father’s abuse. Before my father became an alcoholic he used to be a very good jeweller. We used to have what we wanted, but then my father started having economic problems and could no longer pay our expenses. He turned to alcohol and started drinking very often, always resulting in abuse of my mother. My mother could no longer handle my dad’s beatings and his negligence towards us, so she left, taking only my little two brothers and little sister. The three of us siblings were left with our dad.

Eventually my father quit drinking, got a job, and took my brothers and sisters from my mom. All six of us siblings were reunited again. However, this didn’t last long. Soon my dad began struggling to feed, cloth and educate all six of us. I knew what was next. My dad started drinking again, but this time my mom was not there to take care of the situation, so I had to. I was only 10 years old and I became responsible for taking care of my five siblings. I searched for little jobs, like cleaning, so we could have some money for food.

My dad’s return to alcohol prevented him from keeping a stable job or owning a house. So we jumped from place to place. Soon, I stopped going to school because the responsibility that I had did not let me do things that I really wished to do. I managed until one day I found my dad inhaling some sort of glue, with my little brother in the same room. It really scared me. I took my brothers and sisters and I went to ask for help from our neighbour. She took us to the social services office so I could explain our situation to them. It was really hard for me to leave my dad. Because of my persistence in not letting them separate us as siblings, they took us all to Pan de Vida, an orphanage that promotes family structure. My life story has been different ever since.

When we arrived at Pan de Vida, I thought everyone was crazy. They were all so happy, playing tambourines and singing Christian songs. We watched the kids performing dramas about someone named Jesus rescuing us from our sins. I thought, “Oh no! Where did we end up now!”. But when I had the opportunity to experience a worship service, my heart felt peace for once. I wanted more of this, and I wanted it for the rest of my life. After the service, I spoke with the director of Pan de Vida about Jesus Christ and his love for us.

From that day on, my life was changed. Before that day, my heart was full of bitterness and resentment, but now God revealed His great love to me. I knew he was always with me and was the One taking care of me and my siblings. I have forgiven my parents and believe that my experiences happened for a reason. Now, I live to serve the Lord with my life because it is the only thing that is real and the only thing that makes me feel complete. I desire to make Jesus known, for He is the only one who deserves our love and worship.

After 6 years of serving at the Pan de Vida orphanage as the General Directors, my husband and I decided to moved to Canada in August 2021. I am thankful to have my Canadian Permanent Residency. I am now a stay-at-home Mom, dedicated to caring for my husband and four children: Benjamin, Mateo, Samuel, and Emma. I volunteer on Wednesday mornings at the Hope for Children thrift store, which helps support the 7 ministries under the Children of Hope Charity unbrella.

Thank you for your prayers and financial support. It is greatly appreciated!